Do you want to learn how to play Pokemon? My name is Robert and I have been playing Pokemon for four years.  I am nine years old and I love Pokemon. It is a great game that will really help you with math skills and strategy. Read on to find out about how to play Pokemon. 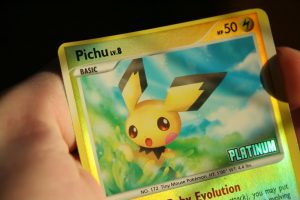 You can buy a 60 card deck or build it with the cards you have. I’ll describe how to build a great deck in a future article.

Before you start the game you need to flip a coin to see who gets to decide if they go first or second. There are lots of coin flips in Pokemon. Instead of flipping a coin, roll a dice. Even numbers are heads and odd numbers are tails.

At the start of the game both players shuffle their deck and draw seven cards. You may look at them and this will be your hand. Find a basic Pokemon in your hand and put it in the active position in front of you. If you have other basic Pokemon you may put them behind the Pokemon you placed in the active (you will find out if it is basic in the top left corner).

This area behind the basic Pokemon is your “bench”. Then you will draw 6 cards from the top of your deck and put them face down on the other side of the playing board. Do not look at these as they will be your prize cards. You put one in your hand every time you knock out a Pokemon. The goal of the game is take all your prize cards and then you win.

How To Use Each Card

The rules for your Pokemon and energy are basic Pokemon evolve into stage 1 and stage 1 evolve into stage 2 and so on. You can not evolve the turn you place the Pokemon. When a Pokemon is knocked out by an attack, and  it is your turn,  you immediately move a Pokemon card on your side up from your bench. 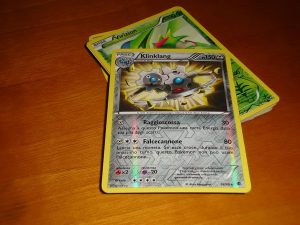 okemon needs energy cards to perform attacks and  sometimes a certain type of energy as in the image below.  There is a circle around little circles which tell you what energy is needed to perform an attack.

You can only play one per turn. Finally we have item cards. The rules for these are very simple and you can play as many as you want by just following  the instructions on the card.

At the start of your turn you draw a card. Then you would probably play and evolve Pokemon but that’s only if you want to.

Next, you would either play a supporter or some items and then a supporter. Remember you can only play one supporter and as many items as you like.

Last, you would attach an energy and finally you would attack if you could. You can only attach one energy per turn and once you attack your turn is over.

Every ten points of damage is 1 on the dice. Place the dice equal to the damage on your opponent’s Pokemon that you attacked. It is now your opponent’s turn. Play continues in this way until you or your opponent have collected all of the prize cards.

Well this concludes my article. I hope this helped you learn how to play Pokemon. Also don’t forget that Pokemon is awesome and you should definitely try it!